Module 1: Israel and the United States: A Tale of Two Democracies

Core Learnings:
Israel’s Declaration of Independence – Megillat Ha’Atzmaut – stipulates Israel’s character as a Jewish democratic state and sovereign homeland for all Jews.
Israel’s Declaration of Independence is its foundational document articulating the country’s core values, including but not limited to liberty, justice, and equality for all citizens (Jewish and not Jewish); as well as freedom of religious, political, and social expression.
Essential Questions:
How does a country’s history influence the values it chooses to embrace?
Why does a country need values?
What is the relationship between a country’s values and its character/decisions as a democratic state?

Israelis celebrating the declaration of independence in Tel Aviv, 1948.
Explanation:

2. Summarize student perspectives on both the role of a declaration of independence and the nature of a democracy.

3. Describe the key questions of this module:

In pairs or groups of three, ask students to read the excerpts from the U.S. Declaration of Independence (**click here for Excerpts Handout**) and, using the attached worksheet (**click here for worksheet**) or a Google Doc, fill out the sections on the right side pertaining to the United States:

3. The Declaration in My Life:

4. Summary of this section:

If the module is done in two sessions, the second session should start here:

Israel was declared a state on May 14, 1948. Today we will recreate on film what that day was like. You will learn what it should feel like based on reading the text of the actual Israeli Declaration of Independence – Megillat Ha'atzmaut.

1. Text study: Creating our own moment of independence

Display the values participants drew out of the U.S. Declaration beside those of Israel’s Megillah.

Close this activity by stressing the connection between the values in the Megillah and the values that we all want to share as we build a community together.

1-Excerpts- US Declaration of Independence.pdf

The Zionist Movement, reflecting the gestalt of the time, emerged simultaneously in Europe and in the Russian Empire in response to growing anti-Semitism in different places. While Jews around the world had prayed for a re-establishment of Jewish sovereignty in Israel since the fall of the Second Temple in the year 70 CE, the Modern Zionists took the next step of launching an ongoing effort to achieve statehood. In 1896, an Austrian Jewish journalist named Theodor Herzl published an influential political pamphlet called The Jewish State, which argued that the establishment of a Jewish state was the only way to protect Jews from anti-Semitism and persecution. Herzl became the leader of Modern Zionism, convening the first Zionist Congress in Switzerland in 1897, where he advocated for the right of the Jewish people to a homeland in, what was then part of the Ottoman Empire known as, Palestine.

With the collapse of the Ottoman Empire during World War I, Britain took over the Mandate for Palestine. In 1917, Britain issued the Balfour Declaration, which declared support for the establishment of a Jewish home in Palestine. Although protested by the Arab states, the Balfour Declaration was included in the British mandate for Palestine, authorized by the League of Nations in 1922. The British ruled the territory during the next tumultuous quarter-century, finally informing the United Nations that it would relinquish the Mandate on May 15, 1948.

In November 1947, the United Nations voted to partition Palestine into two states: one for the Jews and one for the Arabs. The Partition Plan called for the Jewish state to comprise more than half of the territory, although they made up less than half of the population. The Jews accepted the Partition Plan, and the Arabs rejected it. The Palestinian Arabs, aided by volunteers from other countries, fought the Zionist forces, but by May 14, 1948, the Jews had secured full control of their U.N.-allocated share of Palestine, as well as additional territory. On May 14, 1948, on the eve of the expiration of the British Mandate, the State of Israel was proclaimed by Jewish Agency Chairman David Ben-Gurion. In an afternoon ceremony at the Tel Aviv Art Museum, Ben-Gurion pronounced the words "We declare the establishment of a Jewish state in Israel, to be called the State of Israel."

The Declaration of Independence sets the foundations for the government of the new-born State. The values set out in the Declaration continue to shape the religious, political, social, and economic platforms of the modern State, and provide the base for the building and maintenance of the country's democratic system today.

The original Declaration of Independence.jpg

Signers of the American Declaration of Independence.jpg 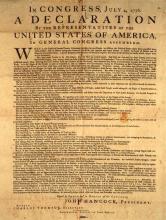 Signers of the Israeli Decleration of Independence.jpg 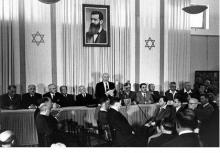 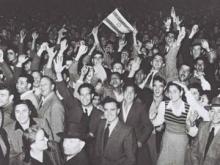 The Signatories of the Israel Declaration of Independence

Declaration of Independence of the State of Israel (English subtitles)